New Transportation Technology: HyperLoop > NY to SF in half hour!

The serial entrepreneur envisions a future where mag-lev trains in enormous pneumatic tubes whisk us from Los Angeles to New York in 45 minutes. Need to be in Beijing tomorrow? No problem. It's a two-hour ride away. 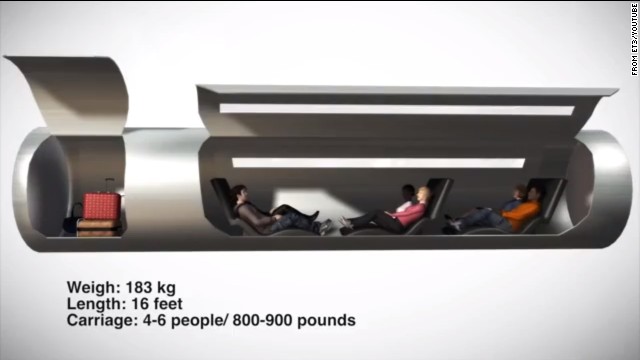 As crazy as it sounds, Musk is merely updating an idea that's been around since the early 1900s, and at least one company is working on a functional prototype. But according to Wired sources, his involvement won't be nearly as hands-on as Musk's other endeavors at Tesla Motors and SpaceX.

The engineering behind the Hyperloop is similar to the old-school pneumatic tube systems used by banks to suck your deposit to the teller at the drive-through. But naturally, it's more complicated than that.

A massive vacuum tube ? mounted either above ground or even under water ? would be combined with a magnetic levitation system used on conventional bullet trains. That means no friction, no wind resistance, no chance of collisions, and insanely high speeds.
Musk described the Hyperloop as "a cross between a Concorde, a railgun and an air hockey table," at AllThingsD's D11 conference earlier this year. And in an interview with PandoDaily, Musk said the Hyperloop could form a fifth tent pole of modern transportation, joining cars, planes, trains, and boats, adding that because of its low energy usage and ability to get juice from solar power, it could generate more power than it would consume

we should implement this when we get our country.

I say we should have Assyria go in the way of Japan, just BE the forefront of technology, and work as innovative as possible.

restart our civilization back from it's 1,000+ year pause.
C

That will be so convenient for us. What about fast-speed trains?

Neon said:
That will be so convenient for us. What about fast-speed trains?
Click to expand...